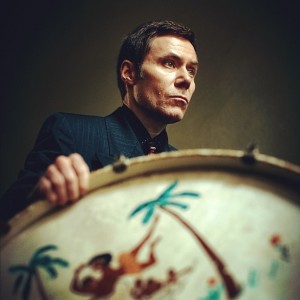 Drummer Thomas Wydler dedicates an Album to his Burly Anscestor

With one hand August W. Johnson snatched a 200lb. barbell from the floor and brought it up at arms length over his head. He was the great-grandfather of Swiss percussionist Thomas Wydler. August W. Johnson’s story is the inspiration behind Wydler’s fascinating new solo album.

The album begins with a fragile piano riff and the pearly shimmer of vibraphone. Somewhere in the background we also hear a subtle percussion motif and repetitive mechanical noise of an indeterminate origin. Even without the title – “Swedish Memories” – this sound collage evokes feelings of yearning, dread and regret.

From the very beginning of his career, Wydler saw the drums as more than a tool to drive a great rock group forwards. In his eyes, the drums were there to tell a story. In this sense, he is much more closely related to the pioneering Swiss percussionist improviser Pierre Favre than Ringo Starr or John Bonham. His last solo album “Soul Sheriff” sounded like a film and its own soundtrack in one. With “On the Mat – and Off”, his approach is even more radical and intriguing. Using his own research work as a starting point, the album tells the story of his great-grandfather, August W. Johnson. To do so, however, Wydler never resorts to the easy narrative method of picking up the musical styles of Johnson’s epoch to paint a picture based on historical sounds and associated images we already know. His biography-turned-music is instead led entirely by the feelings the musician experienced whilst delving into the life and times of his ancestor. The idea of a homage to this “great, beautiful and strong man who has slipped from the world’s radar” came to Wydler quite a few years ago and has simmered away in the back of his mind ever since. “The original inspiration came from Miles Davis’s tribute soundtrack to the boxer Jack Johnson.” he says. “The themes centre around one specific person, but the music relates to that person’s times only in an abstract way.”

At the end of the 19th century, a craze for “muscle men” shows swept through the United States. Giants with names like Professor Attila and Cyclops were feted like opera divas when they hit town to display their awesome powers. August W. Johnson had emigrated from Stockholm to the USA in 1890 and swiftly reinvented himself as the “Lion of Scandinavia”. The pinnacle of his career came in 1903 when he won the “Strongman’s Contest” at the grand Madison Square Garden. Following this triumph, he opened the “Dumbbell Café”, complete with gym, in Manhattan as well as a deli in the Bronx specializing in Scandinavian produce. “My grandfather occasionally told us stories about him – but not many,” says Wydler. Amongst the few traces Johnson left behind were a number of articles and references in contemporary strong man magazines and a few nebulous rumours. One story that appears to be true is that Johnson died young in a tram accident. “Essentially the whole story is melancholic and uncertain,” says Wydler. “It zig-zags between euphoria and depression and is ultimately rather sad.”

Thomas Wydler’s roots as a musician reach back into the vibrant new wave scene of the late 1970s in Zurich, Switzerland. He first played live in the seminal local band Hertz before moving on to the no less influential Rudolph Dietrich band. “Zurich between 1978 and 1980 truly was a very exciting place,” remembers Wydler: “And we were young!” In spring 1980 he travelled to Berlin for a concert with Rudolf Dietrich – and stayed. He first gained wider recognition as a co-founder of the fiery No Wave-band Die Haut with whom he stayed until 1994. In 1985, he also joined the Bad Seeds, the band formed by Nick Cave who was at that time also living in Berlin. 28 years later, Wydler is still part of the Bad Seeds, the longest serving member, apart from Cave himself. This hasn’t stopped him from taking part in a variety of other projects, including Out of Chaos with compatriot Dieter Meier (Yello), the piano/bass/drums group Tanger Trio and the sax/drums duo Gerges-Wydler Projekt. Wydler says that his contributions to the Bad Seeds have little to do on a creative level with his other work. Nevertheless, the two are linked by his ability to use sounds of all kinds to create strong moods and tell a story. Left to his own devices, however, Wydler allows himself a much larger palette of sounds. Complex and subtle rhythms as well as the dynamics created by contrasting organic sound textures form the sonic foundation of his pieces. Wydler himself generates the skeletons of these pieces with percussion, vibraphone and piano. Various guests dotted around the globe later on contribute trumpets, squeaking doors, “Heckeshorn”, guitars and many other conventional and unconventional ingredients. “On the Mat – and Off” is Wydler’s first solo album to feature the human voice. Amongst the singers are Australian maverick Dave Graney, Swedish performance artist and musician Sara Lunden, and Jim Sclavunos, Wydler’s drums partner in the Bad Seeds. Wydler gives all his guests complete freedom, even on the Microphone: “Personally, I can only whisper and scream.” he says “When the time comes, I will”. With “On the Mat – and Off”, Wydler has created a fascinating picture puzzle made up of sounds and songs that flicker and burn in many unexpected ways. What makes this album all the more remarkable is the fact that its avant-garde tendencies never out-muscle the clear melodic lines and, most importantly, the warmth of Wydler’s vision.

Thomas Wydler, “On the Mat – and Off” (Soulsheriff Records)